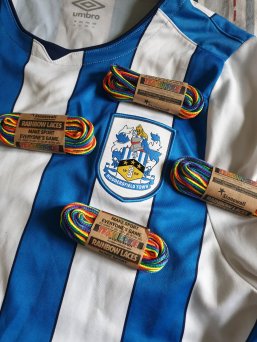 The Rainbow Laces campaign began in 2013 to fight against homophobia, biphobia and transphobia in sport such as football, rugby, this movement was launched by the LGBT equality charity, Stonewall.

The campaign will take place from Friday 22nd November to Sunday 8 December where we will be promoting our LGBT inclusion in football to tackle homophobia during the week. Proud Terriers, Huddersfield Town’s official LGBT supporters group is backing this campaign this year again.

We are delighted that the dedicated Rainbow Laces fixture will happen on Tuesday 26th of November where Huddersfield Town will be playing against Swansea City at The John Smith’s Stadium. Make sure you come and say hello to us before the Swansea City match on Tuesday where we will be handing out Rainbow Laces outside reception at the front of the stadium so come and show your support 🌈

We will be doing another video about this where we are talking openly about the Rainbow Laces campaign so watch this space at end of the month to promote the inclusion in football.

Quotes from our team members below:

Ryan: This campaign really means a lot to me because it definitely helps us to make football a more inclusive game. Without these campaigns there wouldnt be the raising awareness we need that will educate others and the visibility through hearing sports stars stories and football fans experiences shared through articles journalists write. However as much as I love these campaigns I still feel like we have to continue working all year round to make a change in football and not just for the 11 days then it is forgotten about. Its important for the football governing bodies to do more throughout the year and to make change it has to be consistent and here at Proud Terriers and all the other fan groups are consistent and make a difference all year round. Looking forward to seeing you wearing your rainbow laces 🙂

Matthew: As a member of Proud Terriers, I look forward to support the Rainbow Laces campaign this year for first time to making it more inclusive in this sport that I believe this campaign is really important to raise awareness of tackling homophobia to reduce the amount of abuse around our LBGT supporters and other fans groups across the country. This will make a huge difference to sports such as football, rugby, cricket and many more. I really can’t wait to be backing this campaign later this month!

Jake: This campaign is a major factor in eradicating the issue of homophobia from football and I am very excited to be taking part in it with the Proud Terriers and I will be hoping to see a lot of support for the cause and eventually have the issue gone so that the LGBTQ+ community can feel safe and welcome at any sport event (I certainly hope they are at the John Smiths!). Getting the video out there too and making sure that people are aware helps a lot too. So please help us and get others to back us in our fight against this ugly part of football.